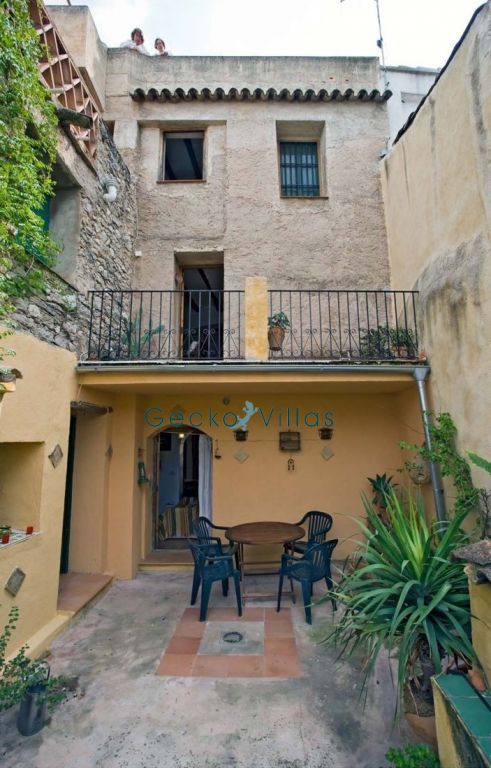 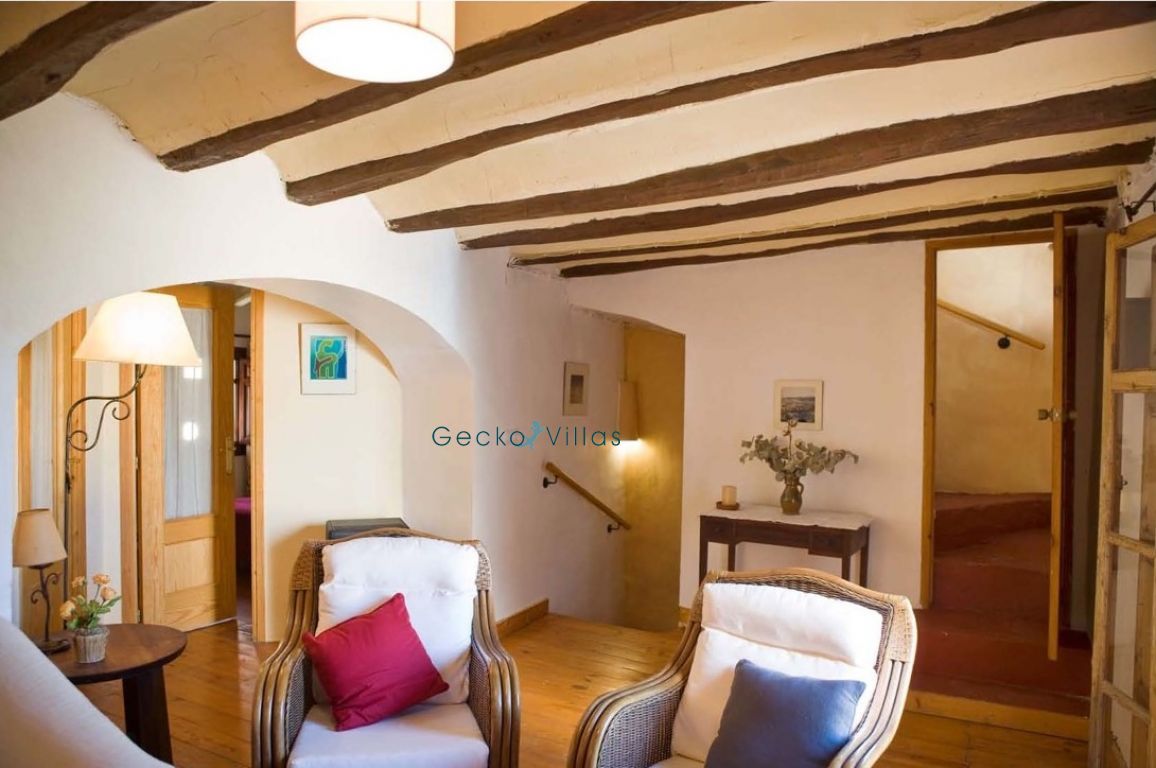 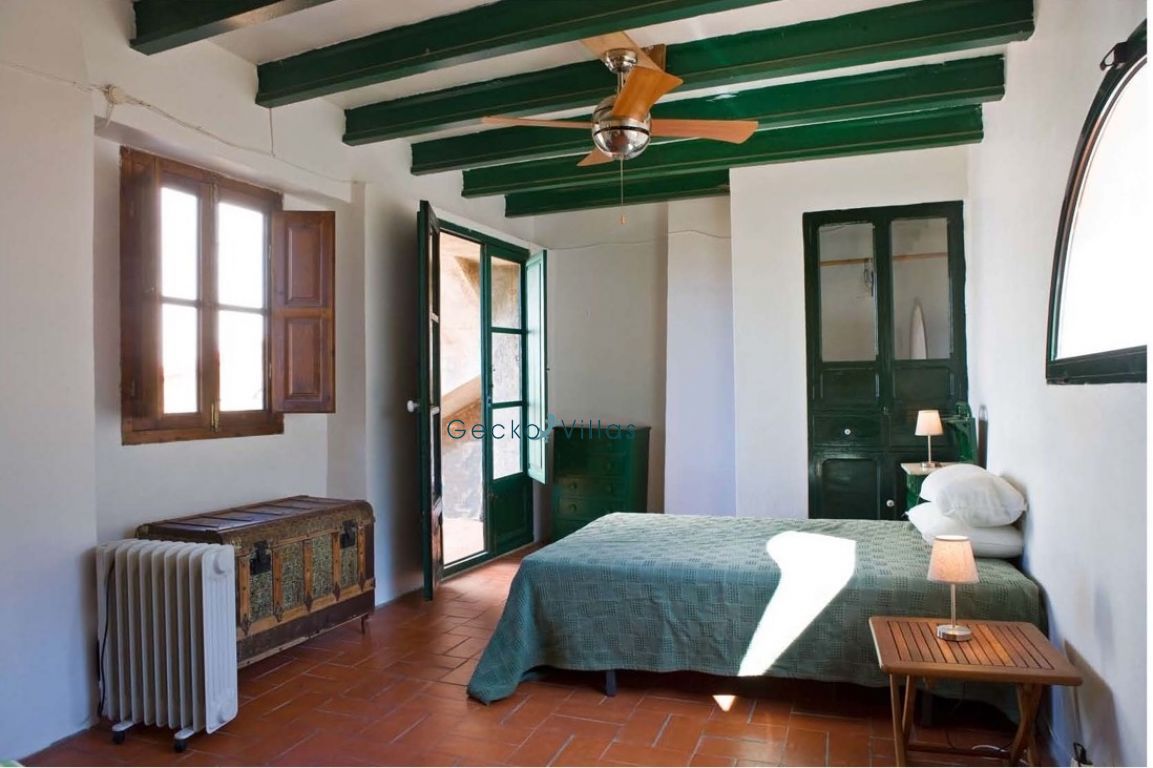 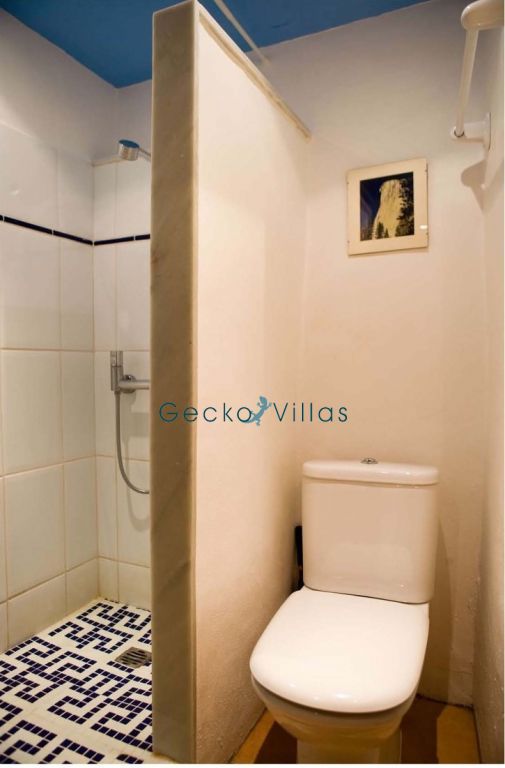 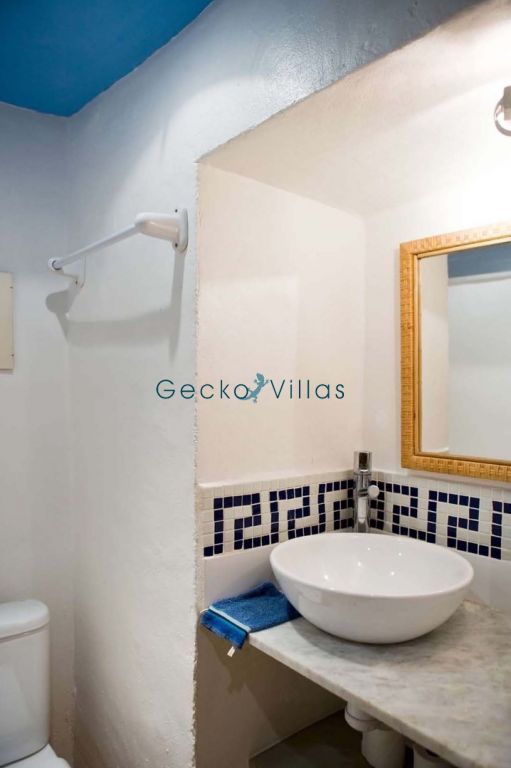 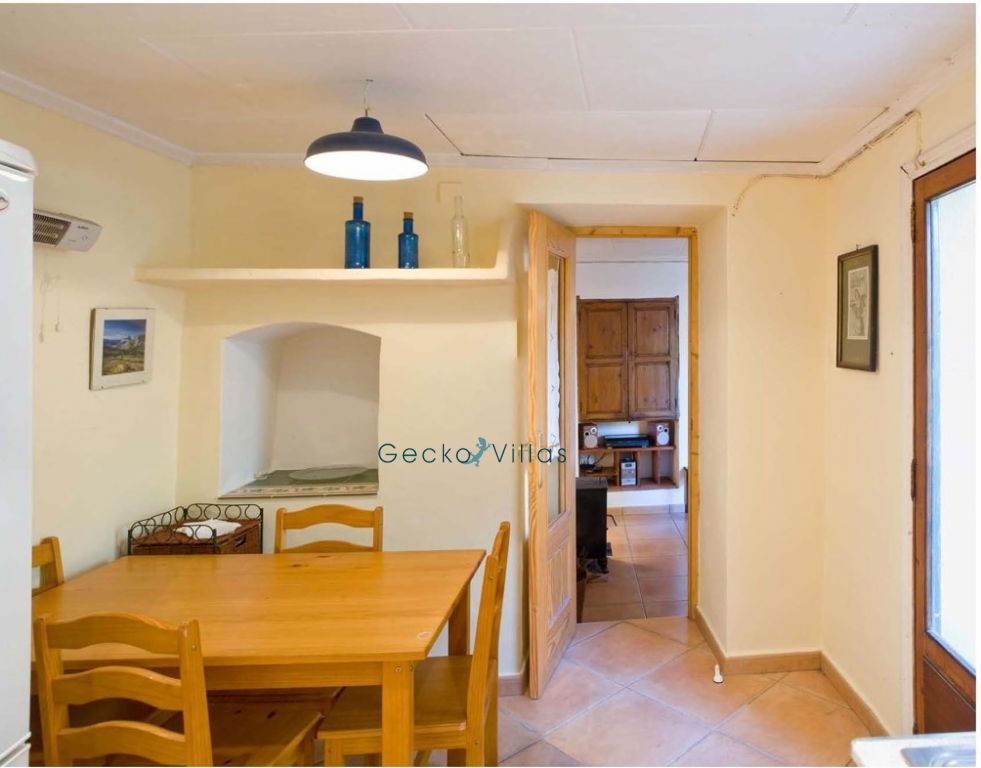 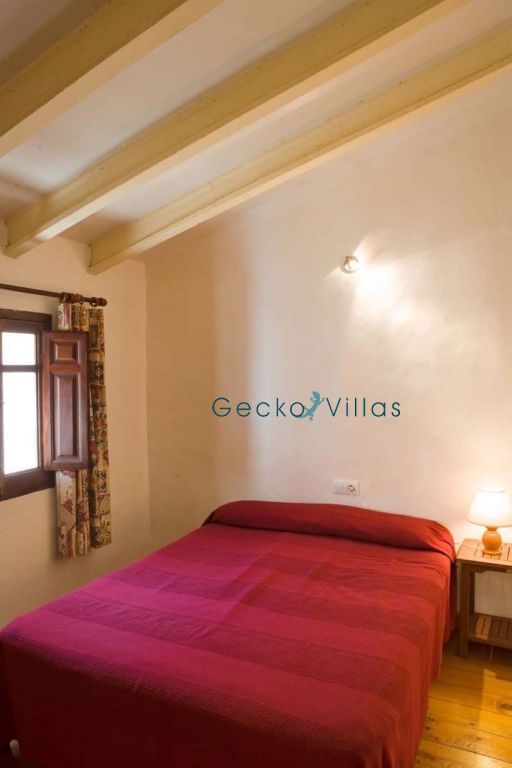 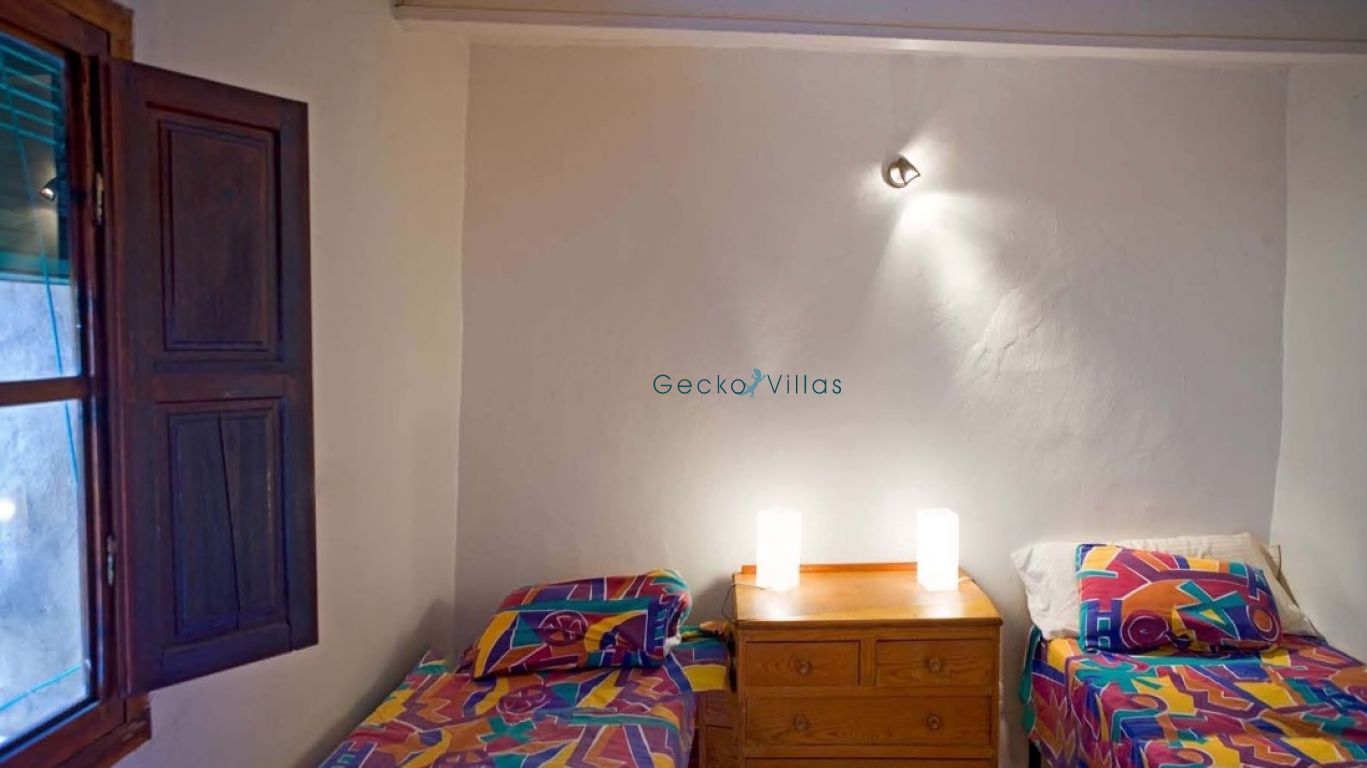 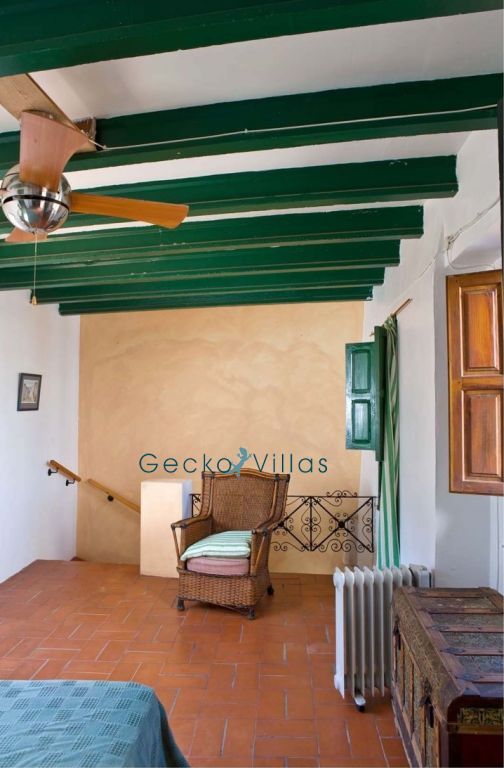 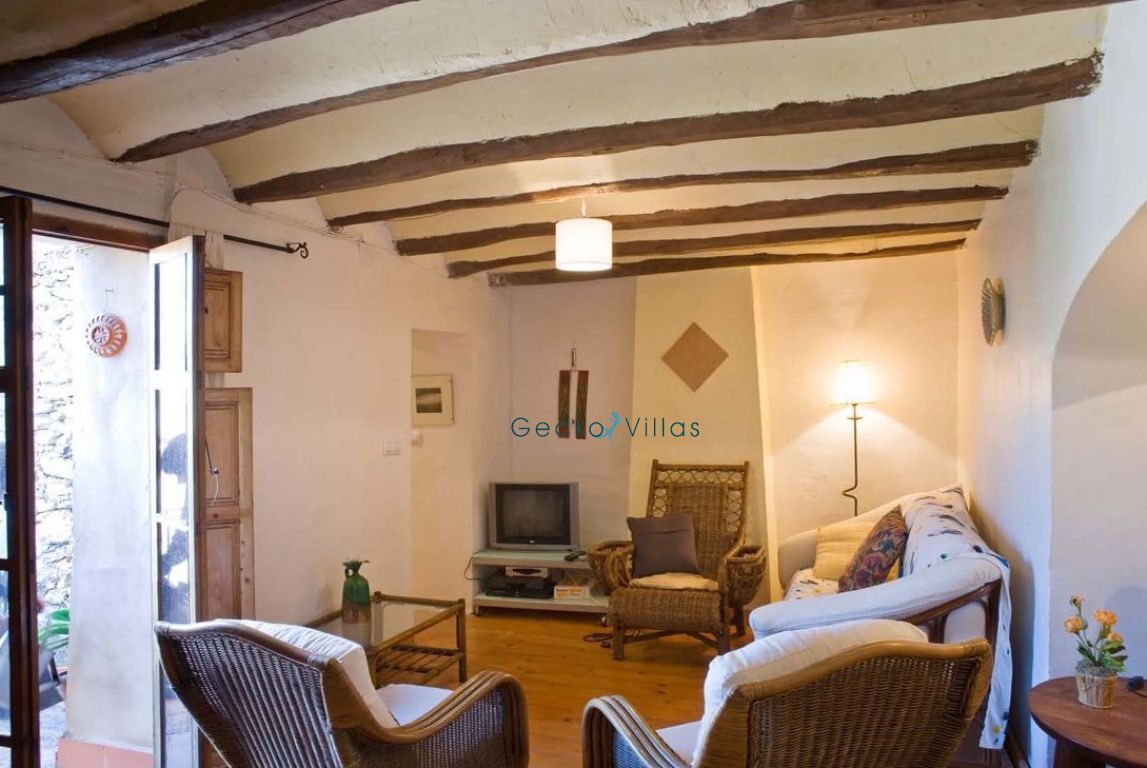 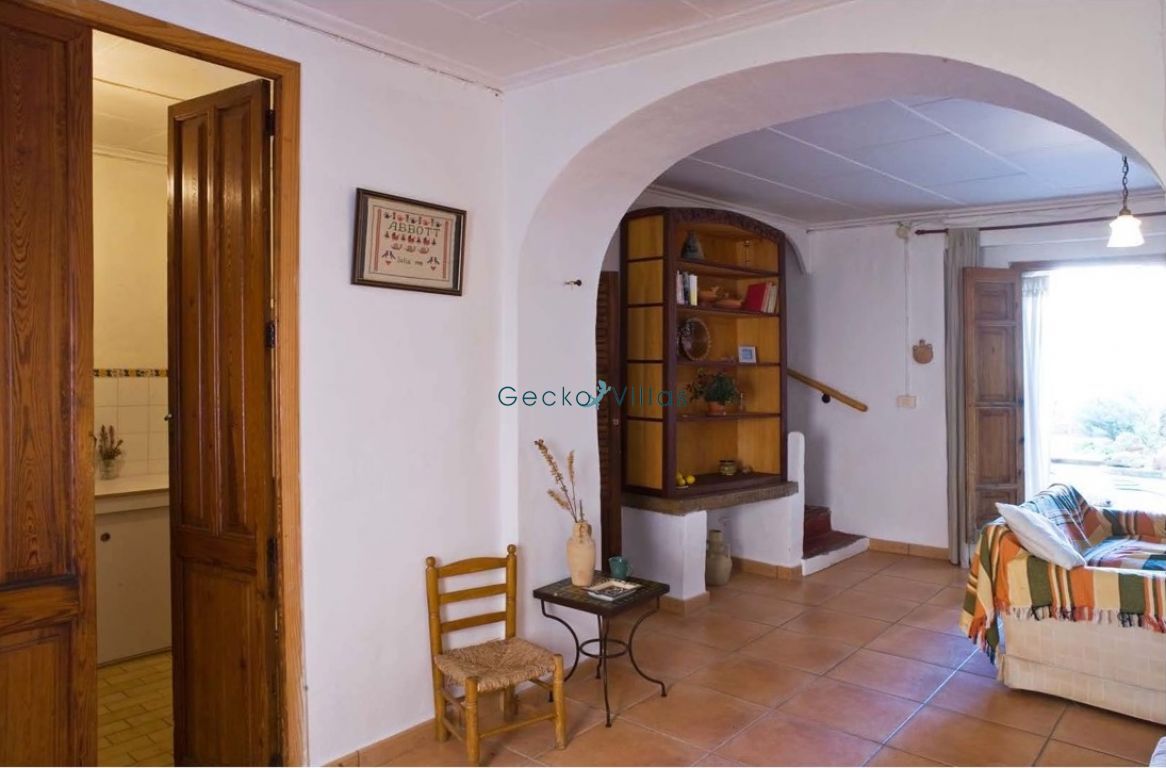 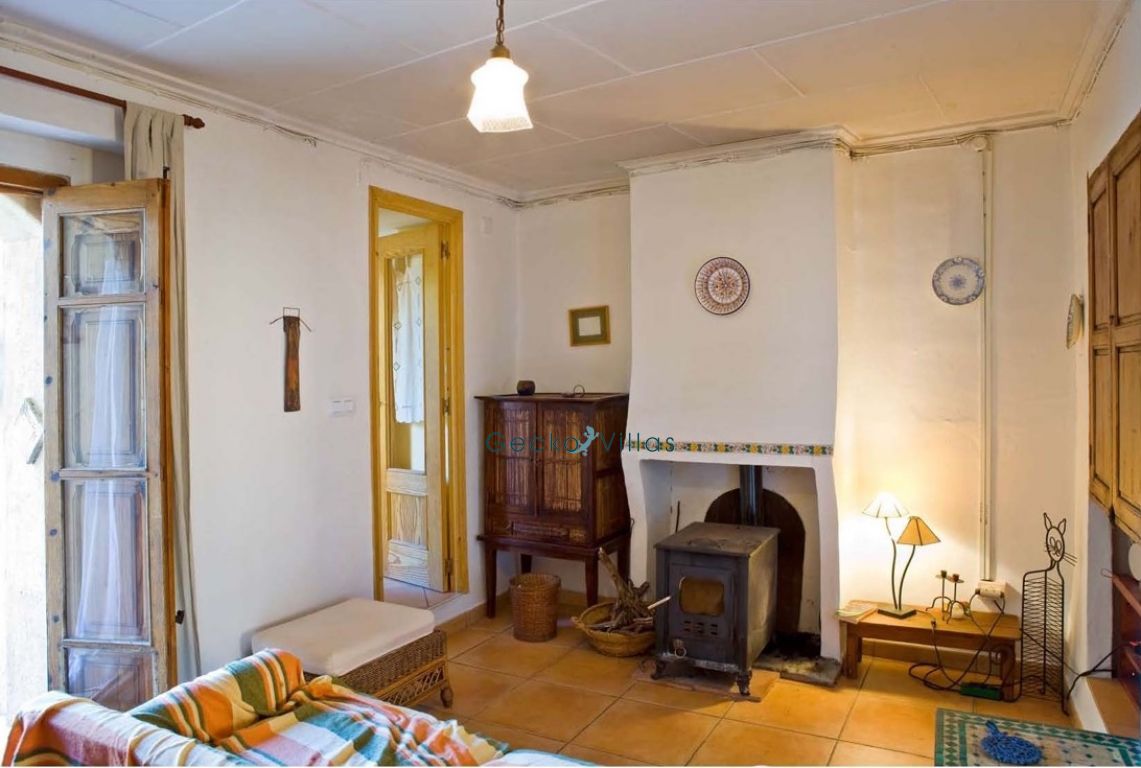 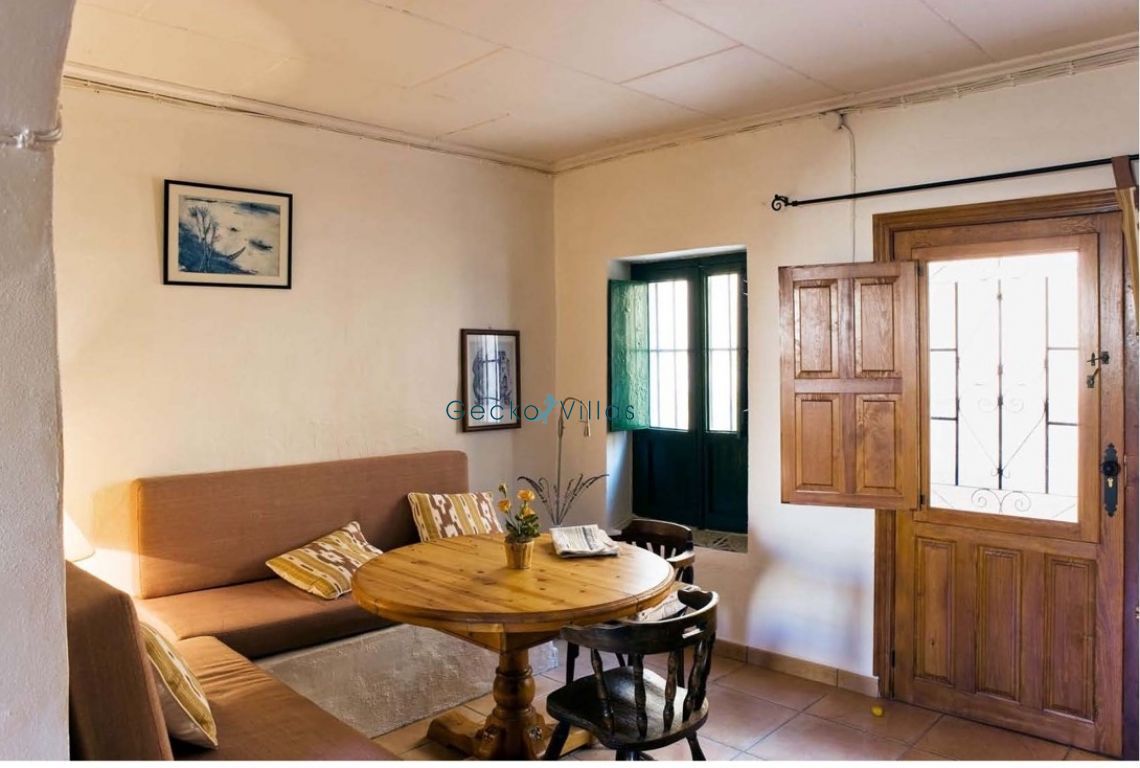 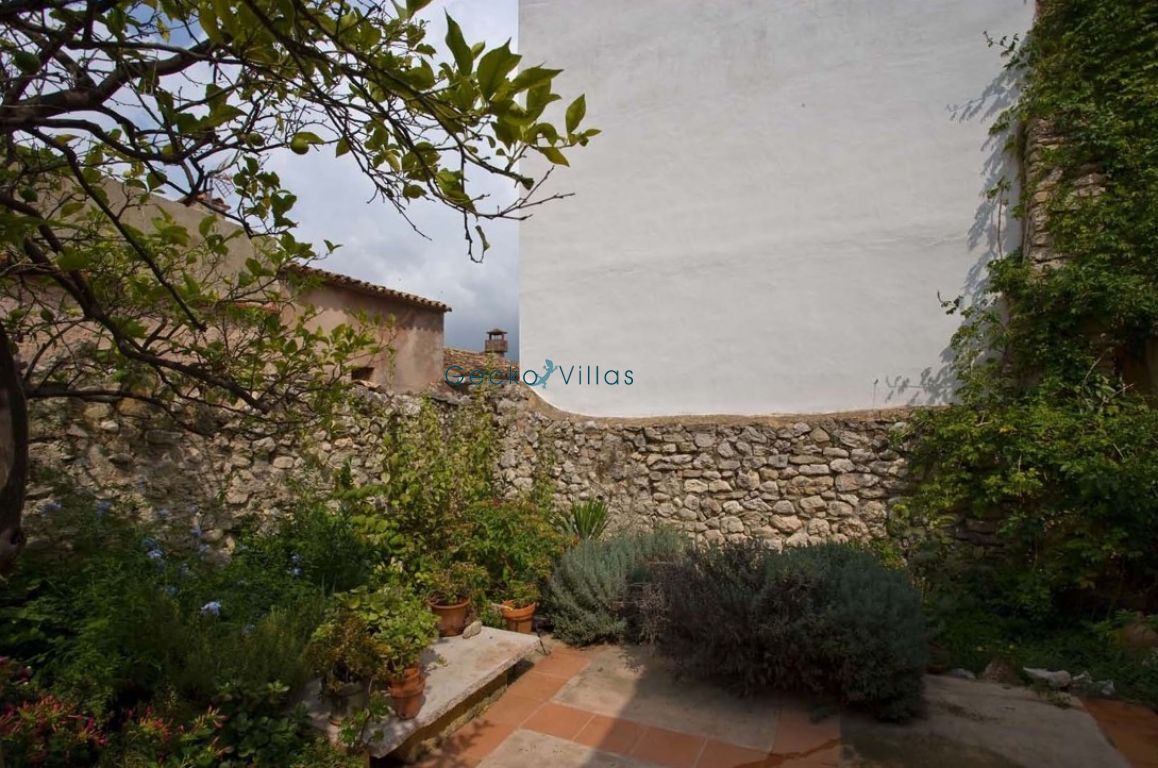 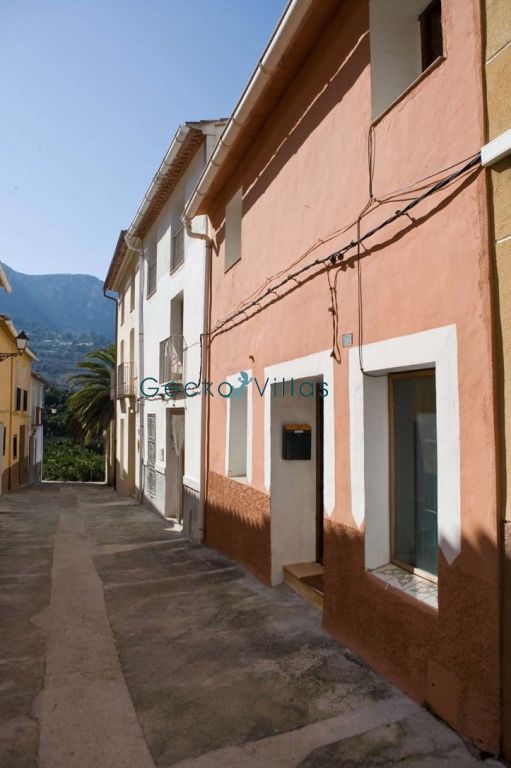 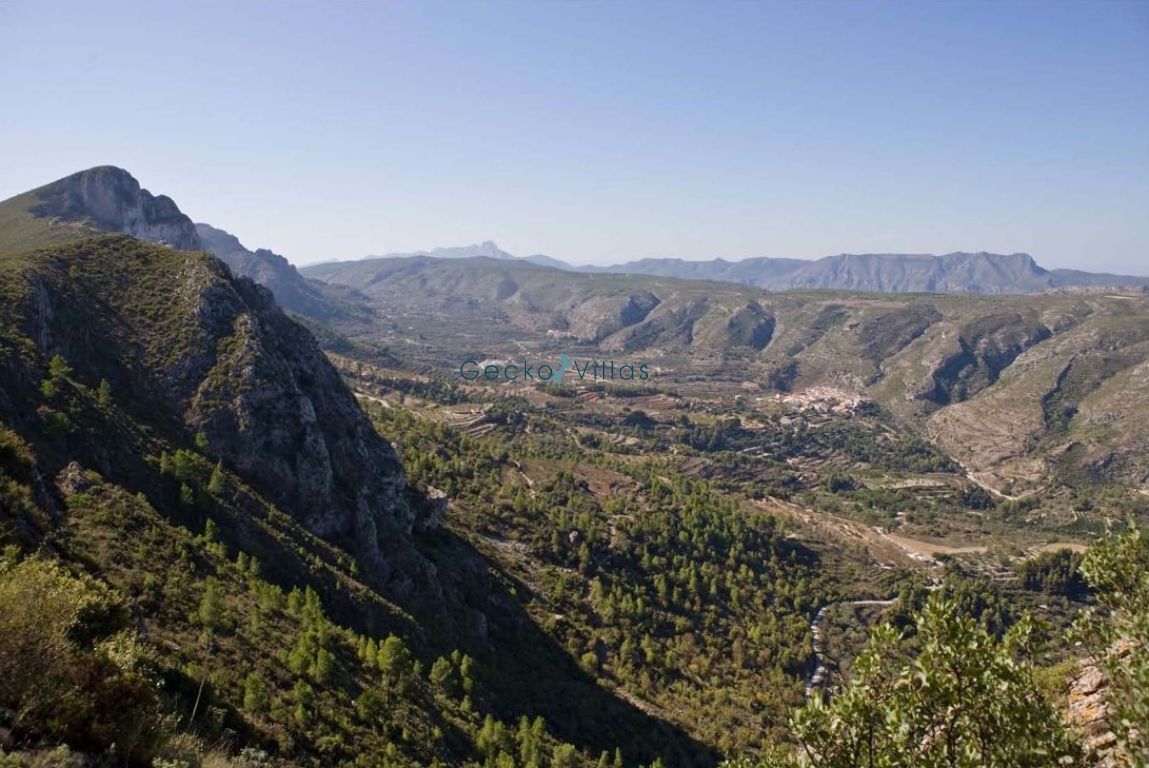 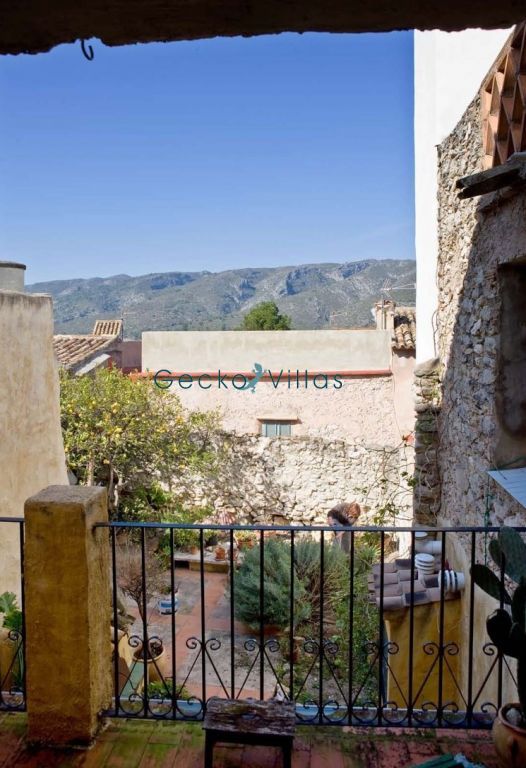 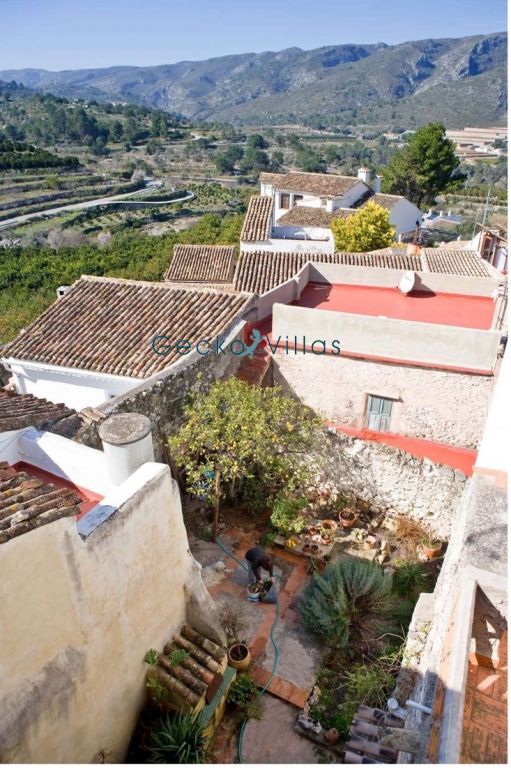 Harmony and sunlight flood this artistically reformed town house, tucked away in the peaceful hamlet of Benitaia in the Vall de la Gallinera. Alicante.
Set on one of Benitaia's three streets, this enchanting house, fully equipped with running water and new electricity installation,still holds many of the original features from when it was built over a hundred years ago, thick stone walls,hidden alcoves and curiously shaped wooden beams.
The front door opens off the pedestrian street onto the ground floor of the house where we find a small dining area with hand built benches sitting next to a south/east facing window that in turn looks out on the street.
Opposite the dining area is the master bathroom. On entering through the original mobila wooden doors, a toilet, a full sized bath and a hand basin can be found in this simply decoratated room.
Here on the ground floor also lays the living room, complete with quality cast-iron log burner for the winter months, set in a cosy area next to the kitchen and showing off the original shelving and cupboards.
The kitchen lays towards the back of the house, offering ample work space,a small seating area for dining,new appliences such as cooker,fridge and washing machine. The kitchen sink is set below a south/west facing window, looking out into a pretty walled courtyard which can be accessed either by double doors off the sitting room or via a single door in the kitchen and covers around 70m2 of open air space.Once a place for chickens and other livestock, this walled sun-trap is now home to an ancient lemon tree bulging with fruit!!A small seating area,shrub garden and working bread oven all make up the pieces of this tranquil area.
We move on up now to the next level of the house,via the original staircase with it's perfectly irregular steps, set on the west side of the living room.Pine wood dresses the floors on this level of the house, and comprises of a sitting room with access to two south facing bedrooms, one of which could be easily made into a cozy office area, a delightful shower room and toilet with a greek touch to the design, and a twin bedroom laying at the end of the house with west facing window overlooking the courtyard.
French windows lead from the sitting area on to a small balcony overlooking the courtyard with views to the surrounding countryside and across to the North to the mountain range Sierra del Almirante .
The second section of the staircase now leads up to the master bedroom.This spacious bedroom, paved with original terracotta floor tiles looks out at the magnificent Sierra de la Foradada to the South through a curiously designed half circle shaped window !!This airy bedroom with it's restored cupboards and furnitutre leads out through wooden double doors onto a large terrace area, where once again the mountain ranges of the North and the open courtyard can be admired and then takes us up via an open air staircase to the last level of this 140m2 house to the roof terrace where amazing views of the Sierra del Almirante,the Sierra de la Foradada, la Sierra Albureca and the villages can be admired.
The village of Benitaia forms part of the eight villages that make up the Vall de la Gallinera and lays at aproximately 15 minutes from larger towns such as Pego,where supermarkets and petrol stations can be found and only 45 minutes from the town of Gandia, where the trains run up to Valencia etc. The vall de la Gallinera is famous for it's cherry trees,blossoming towards the second half of March and it's hiking and mountain bike trails across unspoilt landscapes,a nature-lovers dream with a interesting twist, as on each Equinox the sun sets behind the large opening in the Foradada mountain, flooding light on the the village and the convent of Benitaia......
Most of the villages of the Vall de la Gallinera have restuarants and bakeries but on certain days of the week, farmers and tradesmen literally bring their wares to your doorstep, offering local produce such as cheeses and fresh fruit and vegtables....... The pure essence of Spanish village life....!

Make an offer
×
Arrange a viewing
×
Let us call you
×

WARNING: The company is not responsible for possible errors or changes in the provided information which is not binding nor part of any agreement.